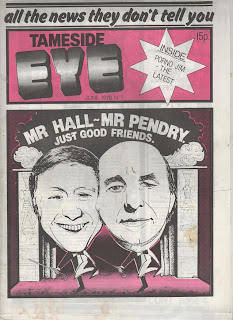 Many years ago in Tameside we had a political magazine called Tameside Eye (not connected to the blog). It was a popular publication which is no longer in circulation. I've been passed this interesting article about the friendship between Stuart Hall and Lord Tom Pendry.

Given the comments on Twitter and the wider blogosphere surrounding the comments I have decided to publish the article featured in an issue after the 1979 General Election.

It is widely known that Stuart Hall, born in Ashton-under-Lyne and later living in neighbouring Stalybridge was close friends with the Labour Peer, Tom Pendry, the former MP for Stalybridge &Hyde. So close in fact, their respective wives had a company together called "Pendry Hall Associates". Hall also campaigned for Pendry in the 1979 general election having appeared on the Labour MPs leaflet saying:

Firstly let me say that this is the first election address I have ever contributed. I am not making it lightly despite the fact that, as you probably know, humour plays a large and vital part of my family and professional life.

I am writing as a Hydonian by birth, my mother still lives on Mottram Road - and as a voter concerned with (ineligible), honesty and integrity. One of my deepest concerns is the apparent gap between London - the seat of Government - and us, the people who live in the "real" world "

According to the Tameside Eye magazine, the BBC became so concerned with Stuart Hall's political affiliation, that they suspended him from his Look North show for the duration of the election as it had tarnished his impartial image.

Not one shy to do pull in favours for his mates, as MP, he set up an Early Day Motion congratulating Stuart Hall on his 40th year in broadcasting.

LOCAL LABOUR MP TOM PENDRY AND TV STAR STUART HALL ARE OLD FRIENDS AND WELL KNOWN PUBLIC FIGURES. BUT RECENTLY THE BOUNDARIES BETWEEN THEIR FRIENDSHIP, THEIR CAREERS AND THEIR FAMILIES HAVE BECOME DIFFICULT TO DISTINGUISH.

In May Stuart Hall wrote an election address for Tom Pendry that was pushed through letter boxes through letter boxes all over his Stalybridge and Hyde seat. The address openly capitalised on Hall's popularity as front-man for the BBC programme 'It's a Knockout!' (See illustration).

As a result Hall was suspended from his job on LOOK NORTH for the duration of the election. The BBC clearly feared that this intrusion into local politics had tarnished his impartial image..

The offending election address stressed his long personal friendship with Pendry and Hall's own concerns with "realities, honesty and integrity". It did not however, mention any business connections between their two families.

In fact Pendry's wife Moira and Hall's wife Hazel, are directors of HALL PENDRY ASSOCIATES, a public relations firm which has worked hard to promote a number of large local businesses.

Last year both the Halls and the Pendrys had dealings of one sort or another with ADAMSON group of local companies, part of ACROW, a large multi-national corporation, Moria Pendry and Hazel Hall in their capacity as directors of HALL PENDRY ASSOCIATES, were doing promotional work for ADAMSON CONTAINERS LTD., in Stockport. This included publicising the visit of a Chinese Trade Delegation to the factory.

Pendry's own involvement with ADAMSONS arose out of his job as MP. There is a traditionally good relationship between Tameside area MPs and ADAMSONS. Their desire for increased employment prospects often coincide with the Company's desire for increased profits. And according to New Manchester Review, Pendry gave support to ADAMSON CONTAINERS in their fight to secure Planning Permission for a factory extension, against the wishes of Stockport Council and the DOE.

So Pendry is reported meeting last year with ADAMSON directors in the Strangers Bar of the House of Commons was quite proper, as was his attendance at an ADAMSON social function at Bell Vue last year, accompanied by his wife and Stuart Hall.

Later on in 1978 Pendry was able to use this special relationship with the ADAMSON directors to help a constituent.

Pendry too her legal papers down to London and acted as a go-between. He passed on ADAMSONS offer of a £500 out-of-court settlement, pointing out that the firm's "Pride was Hurt'. Mrs. Cartilage did not accept the offer, pressed on with her case, and won. ADAMSONS were directed to pay her £3,691 in compensation. This is six times the amount offed through Pendry.

The fact that both Tom and Moira Pendry have had dealings with ADAMSONS had led to speculation that the MP holds some unofficial position in his wife's company. Pendry denies this emphatically, stressing that his wife's business activities are entirely her own concern.

As Tom Pendry is, in the words of Stuart Hall "a man of integrity", there is no reason to doubt this denial. So the fact that on one occasion last year, his duty as an MP to support a large local employer happened to coincide with his wife's duties as a paid Public Relations Officer to that same company, is obviously a pure, if unfortunate coincidence.

Stuart Hall, on the other hand, IS connected with his wife's business.

In letters to clients published in PRIVATE EYE last year he refers to HALL PENDRY ASSOCIATES as "Our Company". The letters give details of how his firm "secured the exclusive rights to promote Liverpool F.C. for the coming season". The go on to explain how sponsors could pay a lump-sum of £25,000 to Liverpool in return for a wide range of advertising privileges, free tickets and other perks. No mention is made of how much HALL PENDRY ASSOCIATES got out of it.

A letter written by Hall to British Leyland in January 1978 shows how he planned to use his position as front man for 'It's a Knockout' to further his promotional campaigns. The letter asked Leyland to subsidize the <scanner cut off> out in Shell-Oil colours, so that Hall could use it "personally on my Knockout travels". Hall argued that this would not only be "promotional for SHELL but LEYLAND as well". Hall then asked hether Leyland would like to become one of the four sponsors "at a major North West 1st division Football Club". Unfortunately, Leyland turned down this package deal because it did not have sufficient merit".

TOM PENDRY WON THE MAY ELECTION WITH A FOOD MAJORITY. AND THAT, NO DOUBT, WAS DUE TO HIS WORK AS A CONSTITUENCY M.P. BUT THE INTERVENSION OF STUART HALL IN THE CAMPAIGN MUST CERTAINLY HAVE HELPED. AND PENDRY'S DEFEATED OPPONENT JOHN KERSHAW MUST NOW BE WISHING THAT HE TOO HAD A FAMOUS TV PERSONALITY PREPARED TO STAND UP AND SAY HOW WONDERFUL HE IS.

Wonder who Hall's friend was, who according to recent reports, let him use his home for his sexual conquests, as he spent most of the week in London?

Lord Pendry is the ex MP and now Peer. Labour again. I wasn't that intersted when the police went after elderly celebs but inevitably they discovered another Labour nonce.What will Tom Watson think, he just wanted to get at the Tories and now there's a Labour Peer in the frame.

Tom Pendry was not only a friend of Stuart Hall but also the convicted rapist Owen Oysten. Pendry is or was a major shareholder in 'Oysten Steel Estates' a property development company owned by Owen Oysten, which had an office in Marbella, Spain. Another friend of these two, was Roy Oldham, the freemason and former Labour leader of TMBC.

Why do Broadbottom residents,inc J. Reynolds and Parker Perry all have a keen interest in Moclin in Spain.
Could it be their pals Pendry,Oyston etc are good for cheap properties.
TMBC have been linked with Moclin Village for some time,is this going to be a refuge for ousted Tameside politicians or maybe a place to hide your loot.

Both Tom Pendry and Stuart Hall were in a friendship group with Roy Oldham and Owen Oysten and as known by residents in Broadbottom (whereTom Pendry's house then was) had riotous parties there at weekends with young girls.

Got a story you want to tell? Do you want to write for Tameside Labour Exposed? Please email in confidence to tamesidelabour@gmail.com. 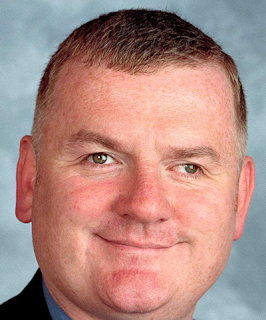 Tameside Labour
Tameside, United Kingdom
A blogger concerned with how our area has become a rotten borough due to the lies and corruption of the Tameside Labour Party.